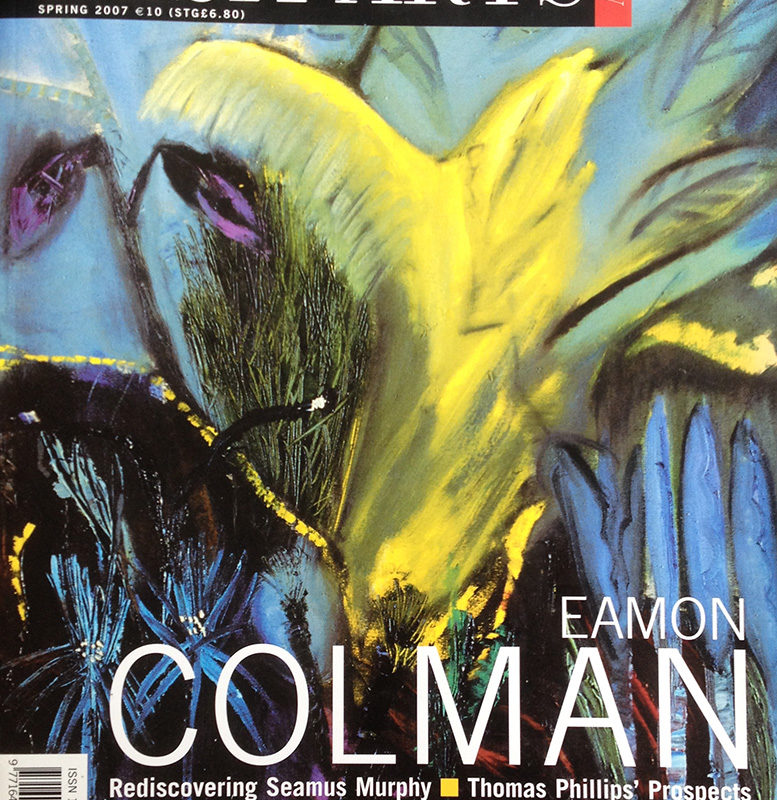 Brian McAvera: Eamon, your father was the well-known artist Seamus O'Colmain, who was part of a group of artists that you grew up with - people like Arthur Armstrong, George Campbell, Gerry Dillon and Nano Reid. How difficult was it to become an artist when you were growing up in the shadow of your father? How would you describe the linkages and differences, in terms of art, between the two of you? And did that primarily Northern group of artists (you also having a Northern grandfather) have any noticeable influence on you!

Eamon Colman: Two things happened very closely. One was that my youthful creative energy turned to gardening and landscape architecture. I wanted to design gardens and be involved with garden architecture but the reality was that I found it too client-based. There was no room for me to let my imagination go, so I started to make drawings again. Looking back, it was probably inevitable, as I was growing up within that particular milieu of contemporary Irish art. They were probably the only artists in the country who were 'avant-garde' and looking to recent European art. I remember George Dillon coming to Malahide Road, where I grew up. I was very young, but that earnest enthusiasm of the child with folded arms was there. My father showed with the Hendrix Gallery on St Stephen's Green. I had built up a nephew-like relationship with David Hendrix. I'd go in every Thursday afternoon, after school, to the gallery, and we'd have a discussion about the current show. All of that had a huge influence on the type of painting I enjoyed.

I think Gerry Dillon probably had a bigger influence on me than George Campbell, though I knew George for longer. The sand paintings of Gerry's (after his 'Clown' series) due to their tonal abstraction - got me looking at academic paint ing in a different way. I started looking at surface. Gerry Dillon encouraged me to look at British art, such as that of Terry Frost, Heron, and Hitchens who was one of the big discoveries for me. I even went over to London to search him out. He was showing at the Redfern Gallery and I was completely bowled over by the apocalyptic destruction within his landscapes. He created this atmosphere by dividing his paining into three, four or five sections. This in turn enabled the paintings to have a narrative. This narrative was particular to the development of British post-War land scape. Elements of the foreground would be pushed into the background and vice versa.

In that way, yes that group of Northern artists would have really influenced me, but the difference for me occurred when I started to discover purely contemporary landscape painting: Sean McSweeney, Barrie Cooke and so on . I remember the Hendrix gallery showing Cooke's 'Borne o' paintings. They were about the way I saw the landscape . It was almost as if I were being given permission to draw and paint the way I wanted to. By the time I was really pain ting however, I was in my twenties. As a kid, drawing was the one area where my father Seamus and myself really communicated. He would set up a little still-life, we would both draw it, and then we would have a discussion about it. He always want ed to treat me as an adult; it was his way of blooding me! His biggest influence on me was to bring me to the galleries and to expose me to art books and literature. As a young child my father gave me a Christmas present of Homer’s Iliad. In disappointment I threw it back at him thinking that it was an inappropriate present for a child - but all of that stuck, and literature has become a huge influence on my painting.

Brian McAvera, playwright, art critic and curator, has published 11 plays, four books on art, including a monograph on Eamon Colman, and numerous catalogues, essays and articles. He is an Associate Editor of Sculpture (USA), and writes regularly for The Irish Arts Review.