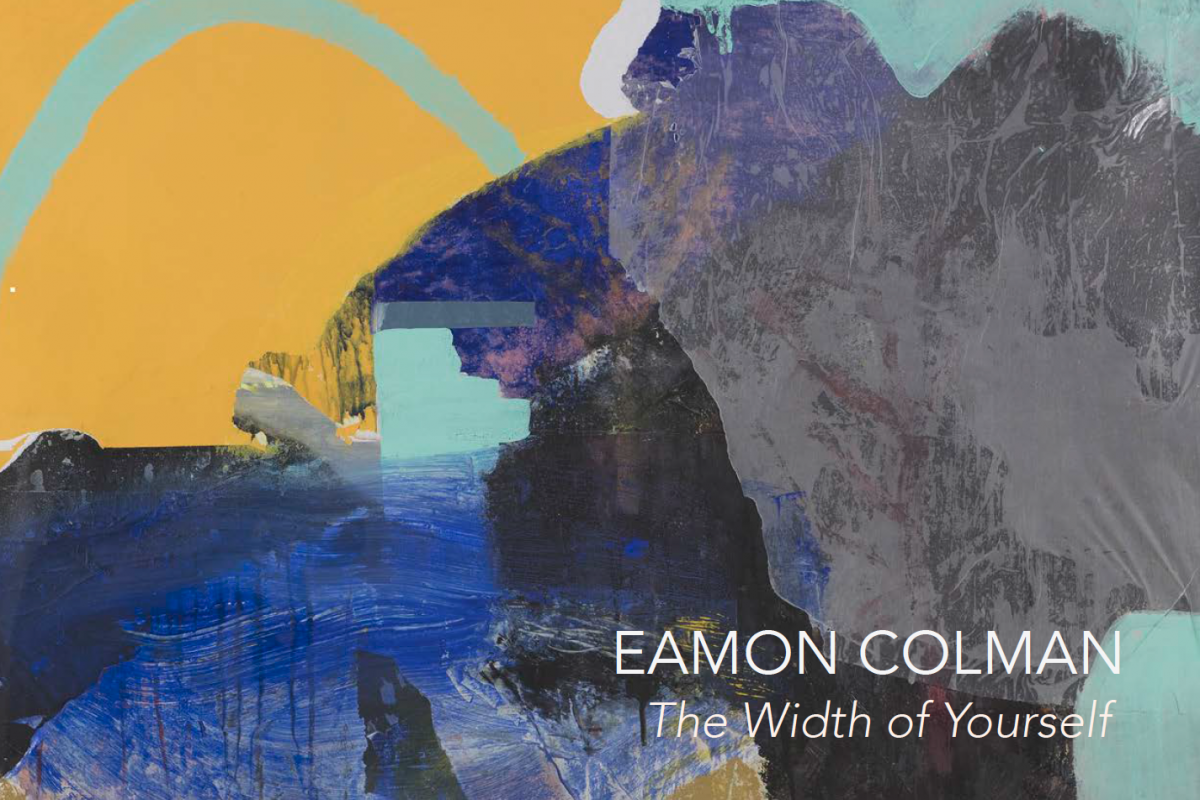 Each of Eamon Colman’s paintings is a new conversation. One between the particular possibilities open to a painter and the almost unlimited material available through a genuinely open approach to engaging with place. A conversation that draws on both the corporeal memory of his walking body and a lively curiosity about just where that body finds itself in the contingent world at any given time. Whether quick or slow, that conversation is enacted physically in the studio but only concluded when Colman has pondered what he’s made and found the evocative words that become a title. (An imaginative act in its own right informed by his deep engagement with poetry, particularly contemporary Irish poetry).

Colman listens to places as much as he looks into them. (Sound, from a bell’s tolling to curlew call, is a significant point of reference in these works). Walking in long-inhabited places, he attends closely to the stories and dreams that underpin our sense of them. In the studio, his touchstones when working are the many direct impressions and inferences gathered while out walking. In consequence, it will be self-evident to him that in painting Above the small holding radio signals penetrate the silence he should evoke both the tangible site of the small holding and the radio signals that float, invisible, above it.

Previously, Colman has made exceptional use of all the possibilities of high key colour. However, his 2017 exhibition, Thinking-in-movement (at the Stern Studio Gallery, Vienna) indicated that he was increasingly modifying that approach, muting his colour to explore new possibilities. In retrospect, this appears as an obvious response to his increasing immersion in rural upland places in northeast County Kilkenny, where he and his family now live in a house situated at nine hundred feet above sea level. By 2019 Colman had abandoned the given rectangle of a stretched canvas to work on paper, ‘finding’ the support for his images as he went along and so stressing qualities of surface and edge. This puts greater emphasis on tactility, on the contingent and provisional aspects of the painting process, so that the images appear wrought rather than simply painted.

The appropriateness of this shift is particularly clear in Cold earth slept below the valley of the thrush and The sodden nest of a cold-eyed thrush. Both evoke the way climate change is inscribing itself ever more emphatically on the already battered and weather-worn Kilkenny uplands, rendering them more ragged, drearier, wetter for longer periods each year. Living in that raw place, frequently grey or white with mist or winter snow, or saturated by days or weeks of incessant rain, and battered and torn by violent storms, how could Colman not respond? In the last few years the surfaces of his paintings have more often seemed almost mauled into being, by turn battered, fragile, slippery, textured by the traces of stain and run-off. His attention to surface is played out to extraordinary effect in Horace there by Homer stands – unusually a borrowed phrase (from Yeats’ Mad As the Mist and Snow)– and in the small Golden fields showed wet and clear. Both of which testify to the acute attention both to the particularities of everyday world in which he is immersed and to the broader resonances that permeate his own responses to it. Yet his willingness to acknowledge the worsening of an already harsh local climate – something he has verified for himself by logging the decrease in sunny days where he lives, walks and works - has in no way inhibited the range or subtlety of these recent works. Despite the quieter role of colour in works like A leaning into the light or Swimming through the fog, the night stops at the hill of souls, their capacity to evoke the rich and shifting complexities of a place remains as potent as ever. Indeed, perhaps more so now than ever before.

Colman’s recent paintings acknowledge the rawness of the world around him, animated as it is by a difficult history and perhaps more difficult future. They serve, that is, not simply as evocations of a place in the here and now, but are also shot through with traces of a complex past slipping away and intimations of various possible futures. As Colman himself has acknowledged: “the earth is a living being like you or I … it’s an organism that breathes and communicates”. These paintings are, I suggest, a clear-sighted response to what one corner of the earth is telling us now.