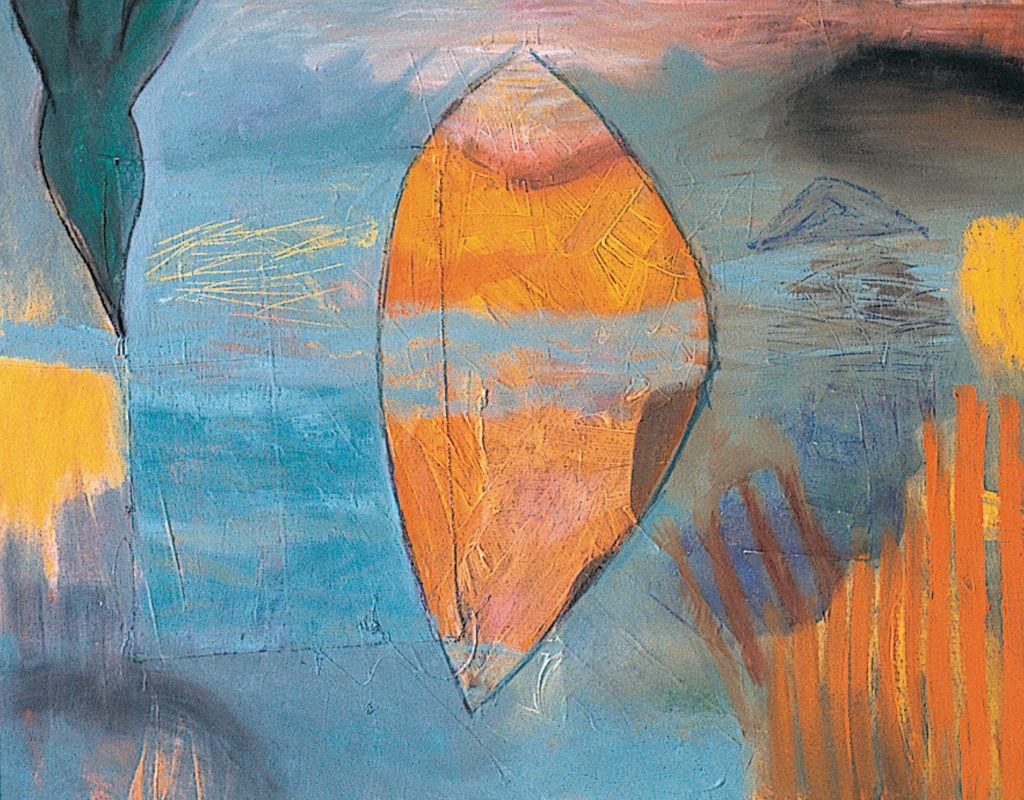 Painting silence in the world

What do we think about when we look at paintings? Unless we have been instructed in the language of art history or schooled in a language of formal criticism, I suspect that most of us, faced with a painting, become quickly swamped in an attempt to command the experience by describing it to ourselves. We swim in a culture that, broadly speaking, is dominated by narrative, and this makes it very difficult for us to approach a sensory experience directly: we are always, in that revealing phrase, trying to collect our thoughts, constantly trying to order experience in language so that we may repeat it to ourselves and to others. We are rarely capable of switching off that incessant voice in the head, the self chattering to itself.

The painter shares a common humanity with us, and is therefore always at risk of being caught in the same trap: faced with the world or standing before the blank canvas he or she is also trapped in this endless internal dialogue, this endless sub-audible flow of words.

It is revealing, bearing this in mind, that Eamon Colman speaks so often of the role that solitude plays in the making of his paintings. Solitude is often productive of stillness, and stilling the internal dialogue in order simply to be is the foundation as it is the aim of meditation; the ideal experience of painting, of making the work or viewing it, is framed in a meditative stillness. You might even say that one of the marks of a good painting, a painting that works on the terms it proposes to itself, and hence to us, is that it evokes that certain stillness. By stillness I mean not the absence of either stimulus or consciousness but actually the reverse of this, a state of heightened attention where mind, eye, breath and awareness of being in the world includes the painting, is animated by and in direct communication with the painting.

A Klee or a Klimt or a Colman can bring me to this place where colour is present as colour, form as form, and the experience of colour and form in play with each other is a sufficient experience in itself. I don’t mean to say that an awareness of art-historical or critical consciousness is not valuable or important; I am simply trying to say that it is sometimes possible, with good painting, to be in the presence of the work without having the experience interpreted or framed by narrative, our own or another’s. There is the sentient self and the thing present to that sentient self and both are in the world and both, for an indeterminate time, are outside history.

Colman is a walker, he walks the world down until the internal voice is quieted and he can see colour, feel space. He walks out into the world until his body remembers its proper home in the world, remembers that it is not separate from the world, and then in the stillness of the studio the memory of sensory experiences gives rise to paintings that in their turn evoke in the viewer the same kind of delight in the fact of being alive in this world. When I stand before one of his paintings I am conscious of being at home in my body, at one with my eye, dwelling on and in the colours and forms that have the whole of my attention. His paintings have what is sometimes called a dreamlike quality, but that’s a lazy term; better to say he sees the world as it falls on his eye, as if unmediated, and paints the world as he would like it to fall on your eye or mine. It is a replete and sensual experience, as full of itself and as sufficient to itself as any experience the delighted seeing body can have.

Colman is, of course, literate and politically savvy, as his African paintings show; he is an acute and original presence in our contemporary debates; he is a generous help and friend to many in the busy world of commissions and workshops and organisation; but what I’m concerned with here is simply his paintings, the products of his imagination which become luminous presences in ours. Coleridge speaks, in the Biographia Literaria, of the distinction between the Primary and Secondary imaginations. The latter, he says, plays with fixities and definites, images, words, forms and stratagems that have been used before and are now composed and recombined in pleasing patterns. The Primary imagination, he says, brings new things into existence, things neither spirit nor matter but indubitably in the world, present to the imagination but only to the imagination. (Coleridge does, of course, go on to say that this proposition will, to many, be like a theory of music to the deaf, of colour to the blind). Eamon Colman makes paintings that are present to the imagination, in the world but not necessarily of it. When I stand in front of one of his works I am not conscious of time passing. I am entirely at ease in what Wittgenstein, lover of Dublin’s Botanic Gardens, calls the only world that is the case, a world that accommodates these paintings with ease. Tapiés does this for me, too, Klee does it, Seán McSweeny does it.

We make a distinction between thought and feeling, as if thought cannot be sensuous or feeling a kind of intelligence. Colman, a thoughtful man, makes paintings that rely for their primary effect on the sensuous intelligence that is present in both the making and the perceiving. Literally, he paints colour and form. The colours and forms are prompted by his attentive presence in the world, but they are not paintings of the world. Better to say they are paintings in the world, new things, unknown before now, sites of pleasure and learning, sufficient to themselves.

Theo Dorgan is a poet, broadcaster, editor, translator and scriptwriter. Recent books include a prose account of a transatlantic journey, Sailing for Home (penguin Ireland, 2004), and Songs of Earth and Light, translations of Slovenian poet Barbara Korun (Southword Editions, 2005)